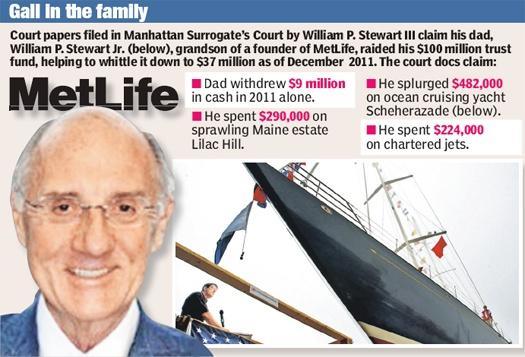 Photo: Portland Press Herald
The great-grandson of MetLife’s founder says his dad ripped off more than half of his $100 million trust fund — and used it to ensure a life of incredible luxury.
Trust-fund baby William P. Stewart III has gone to Manhattan Surrogate’s Court to demand that dad William P. Stewart Jr. account for the money.
Stewart III claims his allegedly finagling father used looted money to finance extravagances including a 154-foot yacht and sprawling pads in Sutton Place, Maine and Bermuda, according to court documents.
The younger Stewart, who goes by the nickname “Tres,’’ claims in legal papers he “has not been paid the trust income to which he is entitled.”
“Rather, the Trustee [his dad] has invested the trust funds in residences, yachts and personal property he uses for his own personal benefit.”
Tres, who lives in Greenwich, Conn., says the fund was established when he was 18 with his dad and his mom, Barbara, as trustees.
William P. Stewart was a founder of the insurance giant.
Stewart III would not comment.
His dad said only, “It’s a sad situation.”
After being threatened with contempt of court, the elder Stewart complied with a judge’s order to deliver an accounting of the money he has spent.
The results were staggering, according to the suit. Stewart, head of his investment firm, W.P. Stewart, had spent more than half his son’s fortune, the court papers allege. The exact amount was not disclosed.
But as of December 2011, only $37 million remained, according to legal papers.
Stewart asked the court for more time to provide additional receipts — but in 2011 alone, he withdrew $9 million in cash and spent thousands on a chartered jet for jaunts to his Mount Desert Island, Maine, home, “Lilac Hill,” court records claim.
Tres first sued to dump his parents as guardians of the vault in March 2006, when they were in a bitter divorce battle.
Barbara got the boot after being accused of stealing millions of dollars.
The court then found she had been evasive in her accounting.
The Maine estate, on the same island where Brooke Astor and Martha Stewart (no relation) spend their summers, has played host to elaborate Fourth of July parties guest-starring country greats like Randy Travis and Reba McEntire.
That’s where Stewart Jr. keeps his custom-built $20 million cruising vessel “Scheherazade,” named after a legendary Persian princess.
Stewart Sr. has raised the ire of his Maine neighbors with rowdy summer soirées complete with annual fireworks shows.
The Surrogate’s Court previously ruled that the assets in Tres’ trust do not belong to the parents, but are set aside solely for their son’s use. The father and son also co-own hefty assets together including multiple Manhattan co-ops, fine art and an airplane.
Other allegedly improper expenditures by the dad include payments for a Swiss ski chalet and a 17,000-square-foot, 14-acre beachfront Bermuda manse, according to the preliminary accounting.
The warring family members are due back in court in September.